Home / Signs a Married Man Wants To Sleep With You Hookup 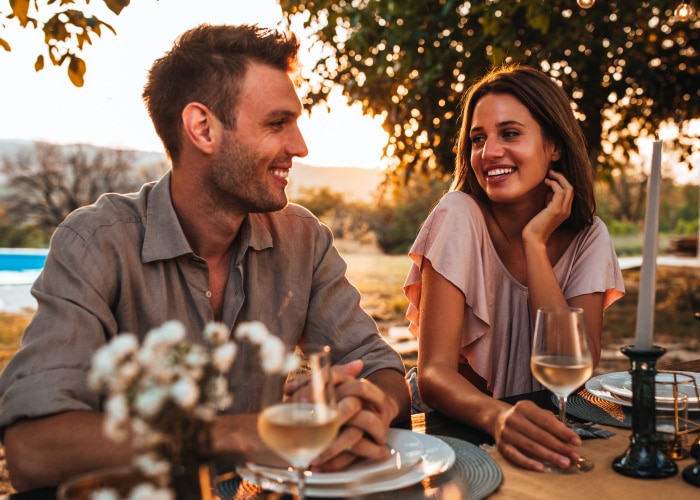 If you are keen to enter a relationship with a married man but are unsure how you would go about making your intentions known, the good news is that most guys are very easily persuaded.

Learn How to Get a Married Man to Sleep with You

You will need to establish whether or not the person you are particularly attracted to is 'available.' If they are married, to what extent are they willing to turn their back on their wife and marriage so they can have some stolen moments of a guilty pleasure? Many males are driven by instinct, so regardless of whether or not they happen to have a band around their ring finger, they will be attracted to any number of females, and the fact they may have made wedding vows about fidelity will be irrelevant to their current state of mind.

The best way of making your intentions known is to flirt openly with the married man you are interested in. A lot of guys will see this kind of interaction as exciting but ultimately harmless behavior - two people enjoying a bit of banter. But there will always be any number of married men who are prepared to take the flirty discussions and innuendo to the next level. If you can display charm, laugh at his humorous asides, and be ready to make suggestive comments, he will be putty in your hands. If you also dress seductively, you are sure to be on a winner with your married man.

The Relationship is over – How to Walk Away from a Married Man?

You might have a lot of fun with someone else's husband, but what happens when the time for talking starts to dwindle, and you find the spark is no longer there? When you feel you need to take a break from your affair, is there ever an appropriate way of walking away from the relationship? As long as you are an adult about this situation, there is no reason why you should fret about the parting company. It would be far more appropriate to discuss the matter openly, rather than simply snubbing your former partner. When you end a relationship with a married man without the appropriate closure, you run the risk of an acrimonious breakup. This can come back to bite you at any time as the ex-flame might well decide to infringe on your social activities. In this day and age, there is always the option of concluding a partnership with a poignant but meaningful text that will get the message across painlessly.

Given the Issues, Why Would a Man Flirt with a Married Woman?

A guy might flirt with a married woman for all manner of reasons. This doesn't automatically mean that he is intending to make advances on someone else's wife or get involved in establishing a serious relationship. On the contrary, many guys simply enjoy flirting, and the fact that the subject of their affections happens to be married is merely a bonus. For a lot of single males, married women represent a challenge. The attraction goes even deeper than this, as women who are in a relationship are regarded as having experience and maturity, especially when it comes to the physical side of things. So rather than wishing to get acquainted with a bunch of younger females in a nightclub who are all competing with each other for superficial attachments, guys pursuing mature married women do so because they appreciate they are in for a fun and exciting time. Flirting is all well and good, but for much of the time, the married female could well be giving off vibes that she is secretly hoping to indulge in something much more intense than flirting. It doesn't happen in all cases, but many instances of flirting will lead to passionate affairs.

Here Are Some of the Signs a Married Man Is Unhappy

If you are a single female with designs on a married man, you need to be able to discern the extent to which they would be a willing partner in this sort of relationship—one thing to look out for signs that a married man seems to be unhappy with his wife. You can certainly read a lot into someone's expression, but a far better way of getting to the root of any potential issue is to indulge in heartfelt conversation.

So approach the married man you are interested in and break the ice with some small talk about family situations, and whether or not they are currently experiencing any issues at home. After asking pertinent questions, you can form a sound opinion on whether or not this indicates they would be up for an affair. It could be the case that they have suffered a short-term fallout with their wife, and have merely entered this club or a bar to let off some steam. But you can quickly discern whether there is more to their state of unhappiness than meets the eye. If they are suffering much deeper feelings of discontentment within their marriage, then they will be vulnerable. You can start your courtship by offering a shoulder to cry on.

What Happens When a Taken Guy Flirts with You?

What should you do if a guy shows a lot of interest in you, flirting openly, and making suggestive comments, only for you to discover that they are not single? As has previously mentioned, even many guys will enjoy flirting openly, but innocently. This could also indicate they are disenchanted with their relationship and are looking for a get-out clause.

When you are seeking to embark on a partnership with someone who is already taken, then you have to accept the fact that not every husband or boyfriend is prepared to jump ship at the first opportunity. They could be restless because something has happened within their relationship, and they are currently on the rebound. This is no basis for anything long-term. By all means, get into a casual sexual relationship with a taken guy, indulging in horny chat and arranging a series of no-strings-attached encounters. But if you are wanting to track down someone who is going to be solid boyfriend material, it would be much better to refer to the site users of your favorite dating resource or matchmaking blog.